“If you like your rock'n'roll short, sharp and spiky, then Bristol grrrl rockers IDestroy might just be your favourite new band. They snap, they crackle, they pop, and they wear studded leather jackets with a feisty punk sneer.” Classic Rock Magazine

Biog: Blasting straight into 2016 comes Bristol three-piece IDestroy, mixing teenage rock’n’roll rebellion with riot grrrl sensibilities, bubblegum pop melodies and a whole heap of sneering, yet charming attitude. Their debut EP, ‘Vanity Loves Me’, is released on February 26th and leads from the off with the infectious title track.

Since forming in 2015, the youthful trio consisting of Bec Jevons (vocals/guitar), Becky Baldwin (bass/backing vocals) and Jenn Haneef (drums) have built up a loyal following in many cities all over the UK through touring tirelessly, bringing maximum energy to every show and leaving the audience hooked. The leather-clad, pop-punkers have not been afraid to take their catchy grrrl power to bigger stages either, playing the likes of Anfi Rock Sound festival in Spain, Bristol Pride Festival and supporting Cherie Currie (The Runaways) at Bristol Bierkeller. “IDestroy produce raw, upbeat punk songs, reminiscent of ‘girl bands’ of the 70s, such as The Runaways, though they seem to do it with more zest and attitude.” (subba-cultcha) 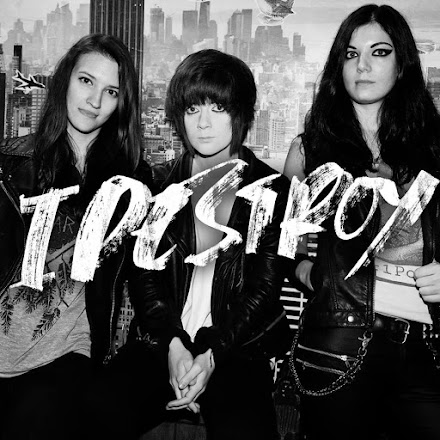