Five by Five are an enigma. In a world that appears to revel in the celebration of the vapid excesses that accompany the rock n roll circus, Five By Five say “to hell with all that” and celebrate what it is to be in love “for the long haul”, what it is to be in love with your children and what it is to have belief in yourself and others. On songs like Marry You Again – “I just hope we can stick together like partners of the same crime” - and The Distance – “What choice do I have/What choice do I really have/What do they know of the lengths I have to go” - vocalist and main songwriter/guitarist Jay Zieseniss might sound like a reconstructed Eddie Vedder but his songs are just rock ‘n’ roll stripped of all escapism, songs that look directly at the messiness and beauty of life as it is actually lived. The band’s debut EP Loud & Clear is, if you will, Elvis Costello’s Punch The Clock to Wham’s Young Guns (Go For It!) and though Zieseniss sounds more like John Cougar Mellencamp than Costello, he shares both artists’ acuity of vision and their ability to reveal a truth both about the composer and the culture that he is observing. Born in a nursing home in late 1970s downtown Bangkok, Zieseniss knew from an early age that he was different. This may have had something to do with the fact that that he found himself attending the International School of Bangkok - at the time predominantly populated by the children of American Military and Embassy Staff (his father is Thai, his mother is American) - and he sensed he had a unique perspective on the relationship between the local contingent and the military/diplomatic presence – “I could pass for white and people would say things in front of me that they wouldn’t say in front of other people,” he says now – although it could just as easily be that he had been told he was the great, great grandson of King Chulalongkom, Rama V, King of Siam, the widely-lauded monarch (known as The Royal Buddha), credited with abolishing slavery in Siam in 1905. For our purposes, however, we’d like to believe it is because his parents (unlike any others he came across) owned vinyl copies of records by Miles Davis, Santana, The Doors, Neil Young, Randy Newman and Kris Kritofferson and this – more than any special privileges he might have been afforded – informed his nascent musical outsider-dom. As a young teenager, Zieseniss was packed off to boarding school (Le Rosey) in Switzerland where he joined the choir and became aware that a certain Sean Lennon had only just vacated the premises. Other Le Rosey luminaries  included Albert Hammond Jnr and Julian Casablancas and before too long Zieseniss had struck up a friendship with the latter, becoming roommates and forming a band together. Naturally, this outfit never became the Strokes but Zieseniss did “fall in love with grunge music” and leave school with a determination to pursue a career in music. Subsequent forays into the live arena have seen Zieseniss performing at Thailand’s largest jazz festival as well as Le Festival des Trois Mondes in Lille and supporting Finlay Quaye, Towers Of London, The Zombies, Rooney, Hard Fi, The Kaiser Chiefs and The Libertines. It wasn’t until 2014 however that he met Cypriot-born drummer Jonathan Phillipou and Glaswegian bassist Stephen Lawson and “something really clicked”  - and Five By Five was born. This blossoming trio recently morphed into one containing ace skin-smith Joe Bradley who took over tub thumping duties after Phillipou had to return to the US to bring up a new-born son. Five By Five is an old aeronautical radio term (where radio signal strength and clarity are measured on a scale of 1 to 5) and you can see why Zieseniss stumbled across it. The expression has come to mean “I understand you perfectly” and there’s something about Zieseniss’s turn of phrase that befits such a moniker: the five-track Loud & Clear EP, produced by Pat Collier (Primal Scream, The Jesus and Mary Chain, Katrina and the Waves, Robyn Hitchcock, Maximo Park) – features a track called Shanghai  - “Let’s go to the movies/Let’s get out of hand” - which Zieseniss describes as “a mythical place, an amalgamation of my childhood memories, playing on the streets in a concrete jungle all mixed in with Serge Leone’s Once Upon A Time In America where Shanghai is a fictional opium den like the one De Niro spends his time in in the film” and yet the song is a metaphor for going out on the town – any town; another track, the White Stripes influenced Prairie Survivor, may be “a fever dream about a man moving across the USA on that trail that leads from the East Coast to the West” but the subtext of the song surely acknowledges the colonization of America by the white man and it is testament to Zieseniss’s half-Thai, half American upbringing that he can imagine himself in this scenario. And Good Fight (which kicks off the EP)  - the video for the song was inspired by Drew Barrymore’s performance in Whip It (2009) and features The Bath Roller Derby Girls - is where we came in and

is about never giving up – “I’m always building up blocks just to watch them come tumbling down/I feel like the last believer left in town.” Of course, 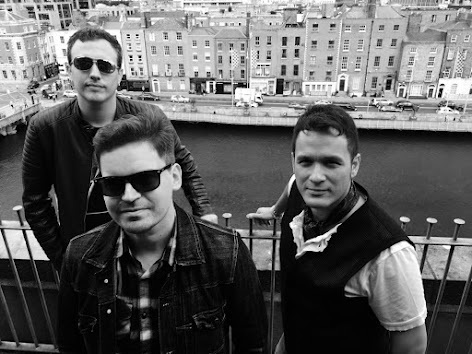