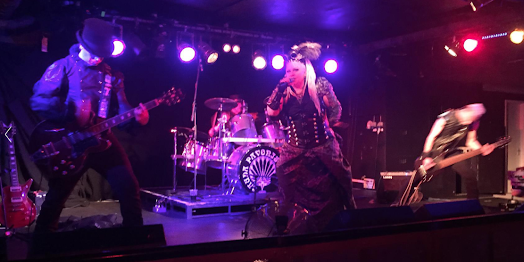 Forged in the heartlands of the UK at the end of the 20th century, CAUDA PAVONIS are an impressive tour de force of 18th century style and 21st century technology all wrapped up in anthemic and driving music. A unique mix of influences brought together to form a band that has endured. Infamous for their Darkwave Buccaneer/Steampunk imagery and theatrical performances the band have played both headline and support appearances at UK and German festivals, including Gothic Pogo Party, WGT, Whitby Gothic Weekend, Spider's Web Festival and Glastonbury Occult Conference to name a few. They have gigged extensively as both headline and support across the UK. Their support slots have seen them appear several times with the likes of Toyah, Inkubus Sukkubus and The Cruxshadows and also include slots with Simon Hinkler (The Mission), Abney Park, Aureleo Voltaire, Department S, The Eden House, Chameleons Vox, Claytown Troupe, Professor Elemental, Gene Loves Jezebel, NFD (Ex-Fields of the Nephilim), Killing Miranda and Midnight Configuration.

The band have self released 5 albums and 5 EP's a single, and 3 download only anthology releases of their earlier work remastered and have appeared on over 35 compilations.

The band is made up of original members Su and Dave Wainwright with guitarist Chris Hines and bass player Cord Frazer..